President Donald Trump wants to reach an agreement on trade with Chinese President Xi Jinping at the Group of 20 nations summit in Argentina later this month and has asked key U.S. officials to begin drafting potential terms, according to four people familiar with the matter.

The push for a possible deal with China was prompted by the president’s telephone call with Xi on Thursday, the people said, requesting anonymity to discuss internal deliberations. Afterward, Trump described the conversation as “long and very good” and said in a tweet that their discussions on trade were “moving along nicely.”

Trump asked key cabinet secretaries to have their staff draw up a potential deal to signal a ceasefire in an escalating trade conflict, the people said, adding that multiple agencies are involved in the drafting of the plan. It was unclear if Trump was easing up on U.S. demands that China has resisted.

The news prompted stocks to surge in Hong Kong and China, while the offshore yuan jumped as much as 0.5 percent for the biggest two-day gain since August. The Hang Seng Index rose 4.2 percent, the biggest gain since 2011, and the Shanghai Composite Index climbed 2.7 percent, posting a fourth day of gains for its longest winning streak since February. 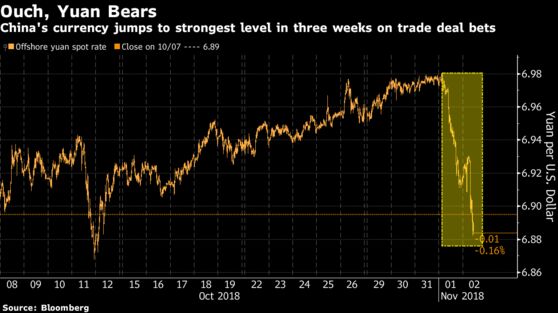 Continue Reading on Bloomberg…
Back to Latest